Medieval Gems for Writers: Did Medieval Houses Have Chimneys

It’s not uncommon to pick up a novel with a medieval setting and hear a description of a cottage with rooms, a loft, lots of furniture like chairs and beds, windows, and a large fireplace with a chimney. Most of us in modern times find it hard to imagine a house without all these trappings. Is that the way it was?

Pick your culture, time period, and social class.
Your story will have more presence if you try and base the cultural setting upon a specific time period and a specific nationality. For example, Tolkien relied heavily on Anglo-Saxon and Scandinavian history. His writing is rife with Old English words and phrases, early Germanic customs, poetry, architecture, etc.

For the purposes of this article I’ll focus on what I know about the Germanic peoples. This includes the Scandinavians, the Germans, the Franks, and the Anglo-Saxons. All of these peoples were related at one time. They originated from what is modern-day Norway, Sweden, Denmark, Holland, and the Netherlands.

I wish I knew more about the Celtic peoples (Gauls, Britons, Picts, etc.), but they had the unfortunate habit of never writing anything down. Everything we know about them we get either through the archaeological record or from second-hand accounts written by Romans, who tended to look down on everyone around them.

There is no firm dividing line in European history as a whole. The early middle ages (the Dark Ages, as some people call it) began around 500AD, and lasted till 1100AD. The high middle ages began sometime around then, and lasted until the Renaissance. The Renaissance began in Italy in the 1300s but didn’t reach England until the 1600s.

Houses and Buildings
You must remember that life in the early middle ages (what some people call the Dark Ages) revolved around the farm. Everyone farmed, from the rich to the poor. The central building on a farm was the hall. This was more or less a really large hut. It was usually long and rectangular. In earlier times it housed animals at one end and people at the other. In slightly later times people had out-buildings where they smoked meat, stored food, kept animals, and even lived. However, the principal building was always the Hall. This is where the lord and his family slept, as well as the lord’s fighting men, his slaves, and anyone else who had sworn to serve him.

Halls could get quite crowded.

Every lord named his hall. The hall of King Hrothgar in Beowulf was called Heorot. Heorot is the Old English word for a hart, which is a male red deer (the female being called a roe). In Lord of the Rings, Théoden, king of Rohan named his hall Meduseld. In Old English, Meduseld literally means “mead-hall”.

The best authors never invent. They’re just really clever about what they copy. When authors invent, we end up with things like sparkly vampires.

Another feature of the hall was the sacred oak. Before they became Christianized, Germanic lords commonly built their hall near a great oak tree. This was a central feature in the yard in front of the hall. This was discontinued in the late 700s as Charlemagne pushed into modern-day Germany and literally forced everyone to become Christian.

Structure
You’ll hear a lot of people saying that early Anglo Saxon houses were basically a square pit with a roof over it. Here’s an example of one. 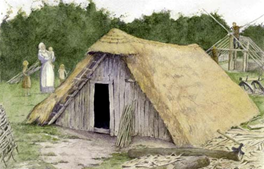 We know this couldn’t have worked because the thatch would quickly rot away, and the house itself would have been very damp. We do know that the Saxons built structures like this, but it is more likely that they were cellars, or perhaps workshops.

Cruck-built houses were very common. A cruck is a curved frame that is carved from the trunk and a single large branch from an oak tree. It has an arched shape. Here is a picture of a cruck-framed house. 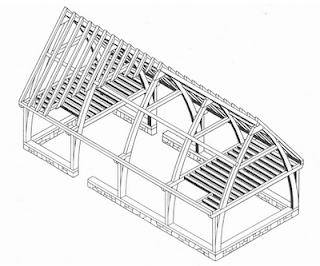 In earlier times the posts were buried in the ground. However any structure that they wanted to last would have been set on a stone foundation of some sort. If you’ve ever put up a fence in your back yard you know that your posts rot away quickly unless they’re set in concrete.

Roofing
Roofing varied from region to region. In England it was nearly always thatch. They did have wooden roofs made of flat planks, but those were more expensive. In Scandinavia they used shingles. It really depends on what building materials are easiest to come by and easiest to work with.

Chimneys
Chimneys and fireplaces were not in use until the high middle ages--around 1200 at the earliest. And even then they were only found in stone castles.  It’s hard to know exactly when they came into general use in peoples' houses. I’m guessing that they were common by the 1500s.

So what did people from earlier times do? One theory is that they built a large hole in their roof directly above the hearth. The obvious problem with that idea is that it would have let in the rain. I have to wonder if they didn’t have a way of covering the hole with a louver or a flap that they could adjust and keep propped open with a long pole.

A much better theory is that they put the smoke-hole at each end of the roof. Here is a picture of a Scandinavian hall from Wikipedia. You can see the smoke holes. 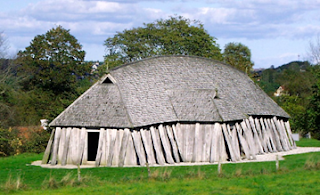 Without a chimney you can imagine that the rafters got all sooty. This is how they cured meats, by the way.

Walls
Romans built out of stone, but the Germanic people seldom did. Monasteries and abbeys were built of stone. Churches were sometimes built out of stone. However, no one else did anything with stone until the 1200s. The reason? Trees were in abundant supply, and wood is so much easier to work with than rocks.

Walls were made of wattle and daub. Wattle is made primarily made from split hazel rods. You take a hazel tree, cut off all the big branches so that it looks like a tall stump. After a year it will grow long whip-like rods that can be split and woven into a lath. See “pollarding” in Wikipedia. People planted hazel trees close together and pruned them like this so that they grew into a dense hedge. Fences and animal pens were also commonly woven from wattle.

Daub is an aggregate material made from wet soil, clay, sand, animal dung (eeeew), and straw. To make a wall of wattle and daub, you make a wattle panel that fits into the space you want to fill, then smear (or daub) this special mud over it. It lasts for quite a while and it insulates well.

Another building material was turf. They used this in Iceland and in places where trees were scarce. Turf walls are thicker. It insulates well against heat in the summer and cold in the winter.

Inside the building, the wall could be paneled or lined with wainscoting. They also hung tapestries, furs, shields, and all manner of weapons.

Floors
Again, stone was rare before the 1200s. Stone or tile floors were not seen in the early middle ages. Until that time, floors were of two types.

The first type was packed earth. It would not be uncommon to cover the floor with straw mixed with sweet-smelling herbs. I imagine it got swept out and replaced often, otherwise the trash and accumulated filth would attract all manner of vermin. This type of flooring was common especially among the poorer class throughout the early middle ages.

A second type of floor was in use during the later Anglo Saxon period. It was mad of wooden planks set on joists. Below this floor would be a pit that could be used as cold storage.

Germanic halls quite often had a raised wooden platform that ran the length of the hall. They could set up tables so that the platform was used as a bench. At night they took down the tables and slept on the platform.

Windows
Windows were unheard of in early medieval times, even among the rich. When windows did come into use, they had no glass and were closed off with shutters. The Anglo Saxons had windows with glass before 1066. Their windows were long and vertical, with a triangular arch at the top. The rest of Europe had glass windows by 1200.

Other common window materials were vellum or horn. These could keep the weather out and let a little light in.

Here is a picture of Beorn's Hall from The Hobbit, drawn by J.R.R. Tolkien.  I've taken the liberty of pointing out the various features that I've talked about so far in this blog. 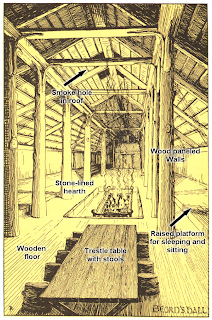 Furniture
Furniture was sparse. Chairs were rare, people mostly sat on stools or benches. If you sat in a chair, you were a lord or you were in a position of considerable authority. This is how the word “chairman” came to be.

Trestle tables were very common, and were used throughout the middle ages. A trestle is a stand, like a saw-horse. You take two of these and lay a long board across it, and there you have a table. To make it look nice you could throw an embroidered table cloth over it. When you need more space you can take it apart and store it somewhere else. Very practical.

As an interesting side-note, the word board originally meant a table. A “board room” is a conference room with a long table. A “board of directors” is a group of elected representatives in charge of a company. The person in charge is called the “chairman of the board”.

Another common furniture item was the chest. These came in all styles and sizes. You could store things in them, and you could use them as a bench or a stool.

There were undoubtedly shelves, but cupboards were probably not seen until later periods. People hung things from hooks that dangled from the rafters.

There is a lot of debate as to whether or not people in early medieval times owned beds. Early Germanic peoples slept together in a large hall, and for the most part they slept on blankets, furs and fleeces. The floors of most houses were strewn with rushes, which were swept out and replaced regularly. I can’t imagine anyone wanting to sleep on that.

Conclusion
Ultimately what you pick to put in your story is up to you.  However, the less you invent, the more authentic your setting will feel.

References
Here are some of the references I used for this blog. One of my favorite sites is Regia Anglorum. They have a ton of stuff about the Anglo Saxon period. Also, never underestimate Wikipedia, but make sure you get a second opinion any time you decide to use something found there.