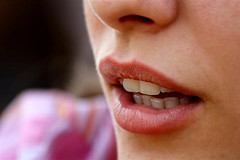 I started reading Stephen King’s book, On Writing, looking for sage pearls of wisdom.  Perhaps it was the ADD, or perhaps it was impatience on my part, but I got half-way through the book and decided that the best way to study Stephen King was to read Stephen king.  The one pearl of wisdom that stuck with me (a commandment which King admitted to breaking again and again) was that when writing dialogue, you should always use ‘said’ as your speech tag.

This rule is pretty much Gospel canon throughout the writing community, and it’s sound advice.

The problem is, nearly all published authors ignore this rule from time to time.  So what gives?

Well, I’ve done research on the topic, and I think I’ve uncovered the secret.  What I’ve come up with are eight rules for writing dialog that won’t make you sound like a rank beginner.

There is a time and a place for creativity, but this is not one of them.  Please.  If you feel that urge to have your character opine, articulate, relate, tell, or vocalize—just stop.  Stand up, take a breath, then count to ten.  Now sit back down and type, ‘said’.
Ok, that’s out of the way.

Rule #2
When a character asks a question, you can (and probably should) use ‘asked’ instead of ‘said’.

Don’t use any other synonym.  This includes queried, inquired, requested, interrogated, etc.  Again, there is a time and a place for creativity; this is not it, either.
Here is an example:

“What time is it?” John asked.

Rule #3
When answering a question, you may use one of the following: said, answered, replied, or responded.

You have a little bit of freedom here, but don’t be tempted to go overboard.  Stick to these four verbs, and you’ll be safe.

See how that just rolls off the page?
Now for a little creativity.  If you’re tired of an endless page full of ‘he said’, and ‘she said’, try this next rule.

Rule #4
If you put a short action sentence before a line of dialogue, you can omit the speech tag altogether.  The sentence should mention the character who is speaking, and it should include an action that the character does.

Ok, this one is going to take an example.

John closed his math textbook and scooped his notes into a pile.  “Is it that late?  I completely lost track of time.”

You can also put the action sentence between two lines of dialogue by the same character.

“I’ll send a text.”  Julie fished her phone out of her backpack and started punching keys on the screen.  “She won’t flip out if she thinks I’m on my way.”

This one can get a little awkward, and it might take some practice to get it right.  Try to keep the subject for both lines of dialogue the same.  In the previous the example, both dialogue lines refer to Julie’s mother: “I’ll send her a text,” and “She won’t flip out…”

Rule #5
You almost never need an adverb after said.

I said almost never, because as a general rule you should avoid it like the plague.  If you’ve done your job well as a writer, the reader should hear your adverb in the character’s voice.   Consider this bad example:

Just reading this sentence you know that Martha is worried.  The reader already gets it, so you don’t need to spell it out for them further.  In this case you ought to fall back to Rule #1.

Here is an example of when an adverb does work:

Mary sidled into the crowded lecture hall and eased into the seat beside her friend.
Jenna covered her mouth with her hand and leaned close.  “Rough morning?”
“My alarm didn’t go off.  I ran here as fast as I could,” Martha answered quietly.

In this case, if I omitted the adverb ‘quietly’, the reader would be left to wonder if Martha is speaking in a normal loud voice, or if she is whispering.

Again, the key is to try Rule #1 first, and read sentence aloud without the adverb.  If ‘said’ still feels a little out of tune then you can add the adverb.

That said, you can still avoid the adverb if you apply Rule #6.

Rule #6
In situations where a character is not speaking with a normal voice (e.g., strong emotion, loud volume, or whispering), you may use any verb that can be construed as a vocal utterance.

What happens if the character is yelling?  Or whispering?

Here is where things can get a little creative—but be conservative.  What you’re looking for is a snug fit.  If you start getting too colorful the effect becomes noticeable and your dialog will start to sound cheesy.

Some examples are in order.  A good place to look for where you might apply this rule would be whenever a character uses an exclamation point.

I’ve followed Rule #1 like you should always try to do, but in this case it just doesn’t fit.  John is clearly not using his inside voice.

Rule #6 can be applied in other ways.  Consider a situation where John is responding sarcastically, or if John is very angry.

“I’m having the best day of my life,” John growled.

The key is to look for moments when the scene is emotionally tense, or situationally ironic.
Use this rule sparingly.  It’s like cooking with celery seed or garlic.  A little bit makes a huge difference, but a little more is way too much.  My rule of thumb is no more than once every page, and save it for the times when the tension in your scene is at its climax.  This isn’t for everyday use.

Rule #7
As a corollary to rule #6, you must never use a verb that is not a vocal utterance, or would in any way be confusing in the reader’s mind.

“I’m having the best day of my life,” John smiled.

Can you see how ‘Smiled’ is not a sound?

You can fix this sentence two ways.  Either you can apply rule #4:

John smiled.  “I’m having the best day of my life.”

“I’m having the best day of my life,” John said with a smile.

Let’s look at another example.

“I’m having the best day of my life,” John laughed.

Is John speaking, or is he laughing?  You really can’t do both.  In this case, you might use rule #4:

John laughed.  “I’m having the best day of my life.”

Rule #8.
If two (and only two) people are speaking in a quick exchange, you can omit the speech tags altogether.

This works if there are just two characters in the scene.  Any more than that, and the exchange becomes confusing.  Here is an example adapted from Monty Python:

Michael knocked on the office door.
A man called from inside.  “Come in!”
Michael opened the door and stepped inside.  Mr. Barnard sat behind his desk, his hands folded in his lap.
“Is this the right room for an argument?” Michael asked.
Mr. Barnard sat forward.  “I’ve told you once.”
Michael frowned.  “No you haven’t.”
“Yes I have.”
“When?”
“Just now.”
“No you didn’t.”
“Yes I did.”

Keep in mind that the reader can quickly lose track of which character is speaking, so after five or six lines you might want to add a conversational beat and a speech tag.

Conclusion
Hopes this helps.  If you disagree, feel free to sound off and let me know what you think.


And keep writing!
Posted by Tom Abbott at 3:52 PM No comments: