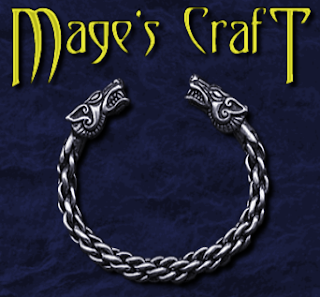 Here’s a jacket cover blurb for Mage’s Craft, the novel that I’m working on.  Let me know what you think:

Osric has learned everything Master Sedric can teach him.  Well, just about everything.  One can never become too comfortable when studying to become a wizard.  The moment you think you know it all, the moment you feel too confident in your craft, that’s when you let down your guard and lose everything you have.

When a hostile band of goblins invades the river country to the west, Master Sedric decides it’s time for Osric’s lessons to include a bit of real world experience.  Osric isn’t sure he wants to go, but he gains confidence as he finds ways to explore his abilities and put his craft to use.  After surviving a surprise goblin ambush, Osric and his two remaining companions seek refuge in an outlaw stronghold ruled by a temperamental dwarf, whom the men affectionately call, “His Royal High Exellency, Snorri the fair.”

Snorri wakes Osric and his companions in the middle of the night and takes them deep into the heart of goblin country, where they steal a rare herb.  Osric suspects that Snorri has placed his friends under an enchantment, making them slaves to the dwarf’s will.  After fighting off a goblin war-band and falling behind, Osric returns home to find that Snorri has enslaved Master Sedric and nearly everyone else that Osric knows.

Osric has seen and heard enough to believe that Snorri is a spy for Mordican, the goblin king.  Osric defies master Sedric, and runs away with a small group of friends in search of a cure for the enchantment.  Meanwhile, the goblins invade and begin pillaging the countryside.  Osric has a host of questions and very few answers.  Why is he immune to the enchantment’s power?  What are Snorri’s ultimate plans?  Will Osric ever put his life back together?

I’m pretty picky when it comes to fantasy.  I’ve read a lot, but it’s all starting to sound the same.  Lots of castles, princes and princesses, lords and ladies, knights and pageantry, courtly love, evil wizards, elves, and dragons—lots of dragons.  You can only go through so many of these stories before they start to feel like you've read them all.  I decided long ago that I wanted to write something different.  My hero wouldn’t be an orphan.  He wouldn’t be the lost heir to a lineage of ancient kings.  And wasn’t going to be the chosen one, destined to save humanity.

I wanted an every-man’s hero, someone that anyone could identify with.  I wanted him to have friends who complimented his ability and contributed to the story in their own way.  I wanted my readers to feel what it was like to learn magic, and to have the hero continually experiment with his abilities, be creative and try new things.  I also wanted to put the reader into a culture that felt real and familiar, yet unique and full of surprises.

I’m currently finishing up the third draft of my story.  I’ve gotten a lot of feedback from my critique group this time around.  When I’m done with this draft I’m going to go through with a final pass and incorporate all the suggestions that I’ve received along the way.

My current plan is to find an agent and have them shop around for a couple of years while I work on a sequel.  If that doesn’t pan out, then I’ll self-publish.  I expect to be fully completed with my story around Christmas time of this year.
Posted by Tom Abbott at 11:53 PM No comments: