Eleven Deadly Pills, and One Placebo 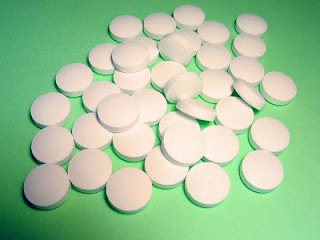 I got asked this question in an interview when I went to work for Microsoft as an intern in 1997.  You've probably heard the version with nine pills, and the safe one is heavier.  What if there were twelve pills and you don't know if the safe one is lighter or heavier?

The Story:
There once was a wise scholar of an ancient land who commited a grave offense against the king, and was sentenced to death. The king, in an attempt to put the scholar's wisdom to the ultimate test, devised an ingenious riddle.


He gave the scholar 12 tiny pills. He was told that 11 of these pills were the deadliest poison, so mortal that upon taking one a man would die in seconds. The 12th pill was a mere placebo, and was completely harmless.

The scholar was also given a simple balance scale, where he might weigh the pills against each other. He was told that all the poison pills were of the exact same weight, but that the placebo weighed differently from them all. He had only THREE tries to find the placebo and live.

Things that you can assume:
1. The difference in weight of each pill is too small to descern by touch.
2. There is absolutely no way to tell by looking at the pills which one is the placebo

Solution:
There are a number of solutions to this problem. The easiest way to explain the approach is to imagine that each pill has a letter, so you can keep track of them.

Step 1:
The objective on your first try is to rule out as many pills as you can. Weigh A+B+C+D against E+F+G+H. If they do NOT balance then go to step 2. If they DO balance, then that means A through H are all poison, and your placebo is one of I, J, K, or L.

Take note of which side was heavier in step 1. Split the heavy side into two groups of two each. Next, pick any two pills from the lighter side and add one to each of the groups you made from the heavier side.

For your final try, weigh G against A. If G and A balance then the placebo is H, otherwise it’s G.

Step 3:
Time to dust off your skills of logical deduction. Look at which side was heavier in step 2. If A+B+E was heavier then it means that either A+B was a heavy placebo, or that F (in the right-side pan) was a light placebo. Weigh A against B. If they balance then F is the placebo. Otherwise the heavier one of either A or B is the placebo.

Otherwise, if C+D+F is heavier then it means that either C+D was a heavy placebo or that E was a light placebo. Weigh C+D. If they balance then E is the placebo. Otherwise the heavier one of either C or D is the placebo.