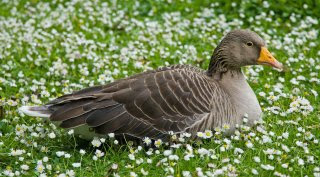 Today I got an instant message from my wife while I was at work. She said “Geese make better guard dogs than…well, guard dogs.”

I landed a few well-aimed retorts for that; but then she told me a most curious tale. Apparently, it’s true!


She was citing a paper published by the Department of Archaeology, at the University of Sheffield:

The reputation that geese had for keeping a watch undoubtedly stems from a famous episode dating back to 390 BC. Apparently Rome had been taken by the Gauls, and the cackling of the geese on the Capitol awakened the Romans just in time to save the Temple of Juno from the enemies’ attack.

As a writer I appreciate any window into history I can get, especially anecdotes like geese saving the Temple of Juno. I shall certainly use that in a story, sometime.

The paper was a trove of early medieval factoids about the use of geese and ducks in Britain, starting from the time of the Romans until the Conquest in 1066. As a writer of medieval fantasy, I’m always wondering what my characters are going to have for dinner. So here you have it, the truth about Geese and Ducks in Anglo-Saxon England.

Geese were valued for many reasons. You can pluck a goose twice a year without having to slaughter it (that’s gotta hurt). The down from the breast feathers made excellent bedding, and was mixed with wool to stuff cushions and pillows.

The larger feathers were used to make quills. Anyone who has written with a quill-pen knows that they don’t last long, so monasteries undoubtedly kept a flock of geese. Aside from all this, goose is a good source of food, both for the meat and for the eggs.

Anyone who’s ever owned a goose knows what kind of noise they can make, so the idea of using them to raise the alarm when you have an intruder is very clever. There are no documented accounts of the Saxons using geese for this purpose, but the Romans were known for it. Don’t expect geese to keep robbers out, however. All you need to send them running is a heavy stick. I know that from my own experience.

As for ducks, they were looked down upon as a poor-man’s food. Apparently they’ll eat anything, and as any hunter will tell you, an animal tastes like what it eats. I’ve been told that wild duck can have a fishy flavor, which doesn’t surprise me.

The Romans had a taste for duck, but the Anglo-Saxons couldn’t stand it. In fact, ducks were often considered a public nuisance, as they flocked around public water supplies and left the ponds and river banks polluted.

I’ve never had goose, but a quick search on the internet reveals that it is all fatty dark meat and has a flavor all its own, but its taste is most similar to duck.

I’ve had duck before. The meat is very dark, and its flavor is a bit like chicken but with a very strong dark-meat taste. You can cook it rare or well done, just like beef. You can get Peking Duck at Chinese restaurants, but beware that they slice the carcass crossways—bones and all—and you’ll be picking splinters out of your teeth all night. You can get duck at any French restaurant. Make sure you get it medium or well done, as rare duck has a disturbing, gummy (albeit flavorful) texture.