The Prisoners and the Hats: A Logic Puzzle 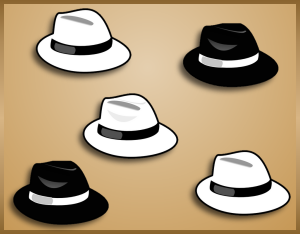 Are you ready to feed your inner geek? Let's go.

Five men are doomed to be executed by firing squad. On the night before their execution they are given a chance to spare their lives. They must follow these instructions, and if any prisoner violates the rules then all the prisoners will be shot:
After all the prisoners have given their answers, those who correctly guessed the color of the hat that they are wearing will be spared and set free. The rest will be shot.

The prisoners have all night to think about their quandary. They stay awake figuring out a way so that they can pass the ordeal together and spare the most lives possible. They are allowed to talk freely among themselves, prepare their plan, and practice it until the morning.
What will they do?

The person in the back of the line has no information to work with. His odds are at best 50/50. So whatever he says, he might as well use his chance to save the lives the rest.

One solution would be for prisoner 5 to shout the color of prisoner 4’s hat. Prisoner 4 can then be spared. This can be repeated with prisoner 3 and 2. Prisoner 1 can say whatever he wants. This solution will guarantee that at least two prisoners are spared.

There is a much better solution, which is guaranteed to save 4 lives. Pretend you are one of the prisoners. Before everyone begins, all prisoners must count the number of white hats that they see in front of them and remember that number. As each prisoner behind you calls out the color of their hat, you must add one to your total every time you hear the color “white”. When it gets to your turn, if the number in your head is even then you shout out “white”. If the number in your head is odd then you shout out “black”.

Let’s work through an example. Suppose that everyone’s hat is black. All prisoners will have a count of 0.

Prisoner 5’s answer was wrong in this case. He dies by firing squad, but his four other mates get to walk out alive.

That seemed way too easy. Let’s do it again. Suppose that everyone’s hat is white.

This time prisoner 5 was correct, so they all get to live.


This system works for any combination of white and black hats, and is guaranteed to spare the lives of the first four prisoners. Prisoner 5 will never have more than a 50/50 chance.

Try some combinations for yourself.


Computers use a system of error-checking called parity whenever they have to transmit data across a wire, or store it in a memory chip. Depending on the algorithm, the receiving computer can tell if there was an error and ask for a transmission. Some algorithms will allow the receiver to figure out which bit got garbled and correct the problem. Look up “error detection and correction” on Wikipedia for more information.

For more discussion you can check out this article on Wikipedia
Posted by Tom Abbott at 8:02 PM