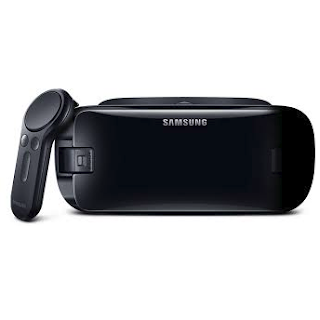 I recently purchased a Samsung Gear VR headset to try it out. I'm a programmer, so I'm kind of interested in how easy it would be to do a few projects that make use of it.

The headset was pretty much plug and play.  It took a few minutes to get all the straps connected, but then I just plugged in my phone, and then it downloaded all the software over WiFi, and that was it.  Setup was pretty much a no-brainer.

The headset comes with a little controller, which is pretty easy to use, once you've paired it.

You will need a good pair of headphones, preferably Bluetooth, but you can also plug into the headphone jack if your plug isn't too bulky.

If you're going to be on this for a long time, you'll also need an 8' USB C cable to keep the unit and your phone both charged.

Before you connect your phone, you absolutely must clean off your screen.  Use some Windex, and then wipe it down with a dry Kleenex.  If there is any dirt or grease (or scratches) on your screen, it will be kind of distracting.

Connecting to the headset is about the easiest I've ever seen.  You plug it into the USB-C connector, snap the phone in place, and the software starts up automatically.  It's that dead-simple.  You don't have to launch a VR app or anything.  The phone just automagically goes into VR headset mode.

When you're done and you want to go do other stuff, all you have to do is snap the phone out of the headset.  The software exits automatically, and returns your phone to its normal mode.

When I first put this headset on, I was like, WOW! I couldn't stop laughing. It was totally, completely immersive.

You do need to be sitting down. An office chair would work best, so you can turn 360 degrees. Make sure you have plenty of space around you, because once you put the headset on, you're completely immersed and oblivious to the real world.

You can wear the headset with glasses, which is a good thing.  The only thing to be aware of is that light will get in and reflect off your glasses.  It's kind of distracting

It feels like you're wearing a scuba mask (if you've ever been scuba diving).  Except it's heavier, but it's not too bad, really.  I played with it for about an hour and I hadn't gotten tired of wearing it at all.  It was oddly warm, but that was because there's this padded, insulated, box covering your face.

Your field of view is somewhere between 90 and 110 degrees.  I didn't notice this at first, but it gives you a slight tunnel-vision effect.  Peripheral vision is pretty good, but if you roll your eyes side to side you'll notice pretty quick that you have no side vision.  Again, it's a lot like wearing a scuba mask.  Except a bit heavier, but not too bad.

The picture is not as sharp as I'd like it to be.  It was not too badly pixelated, but I felt like I was looking at the world through a screen door.  Smaller phones ought to have a better picture, but what you really need is a phone with 4K resolution.  The Note 8's resolution of 2960×1440 is somewhere between 1080p and 4K.

I didn't notice any eye-strain until I took the headset off.  Something about the lenses makes your eyes use muscles that they don't normally use.

Actually being inside the device gives you this weird disembodied effect.  You look down expecting to see your hands and your feet, but they're gone.  In fact, there is no sense of self at all.  You're just this weird floating head that can look up, down, left, right, and tilt from side to side.

You can't actually move around in any of the rooms that you're in.  You're pretty much fixed in one POV.  You can look around in all directions, but you stay where you are.

I'm pretty good with computers, so the interface wasn't too hard to figure out.

The little controller is really nice. It allows you to look at one thing and point at another thing. It feels a lot like using a laser pointer, but it doesn't actually move through 3-space. Rather, it pivots about a fixed point that lies somewhere in the vicinity of your right elbow.

It feels natural, until you try to move your hand around in front of your face.  Only then do you realize that your controller can only sense motion that sweeps up, down, left, or right, or motion that rolls laterally from one side to the other. There is no way for the controller to know where it is physically in space, in relation to the headset, itself.

Voice commands need a lot of work. The speech recognition is really good, but it's just not integrated into anything. To do a voice command, you say, "okay oculus", which just sounds dorky, especially if you're not the only one in the room.

The command shell needs work. None of your phone's normal apps work in VR--like at all--which is just super weird.  I mean, why not?  You have this huge screen real-estate, so it ought to be a complete no-brainer to give me a home screen and let me use all my apps.

It would be nice if notifications popped up somewhere off to the side instead of right in the middle of my face. Duh.

There is a software keyboard that you can use.  It's pretty OK, but there are times when I wish there was a microphone icon, and I could just use speech recognition, which is already pretty good.

You are completely oblivious to the world around you when the headset is on. It would be really nice if you could activate the phone's camera in order to see what's going on in the real world.

I sat and watched Netflix for a little while.  Netflix's app puts you on a couch in a living room that looks like a cabin.  In front of you is a 7-foot screen.

And then the screen-door effect started getting on my nerves.  I can get a much sharper picture just sitting at my computer.

I spent some time watching random videos on YouTube.  YouTube has a split-screen mode so binocular videos show up in 3D.  It also has a 360 mode for videos that are shot in 360 degrees.  You really, really need an office chair for that, so you can spin around.

All the games cost $6.00 or $7.00 to play.  I think my kids would really enjoy Minecraft.  I might buy Minecraft just so I can bargain and say, do a load of dishes or a load of laundry for an hour.

This is strictly a ONE PERSON experience. Once you put on the headset, you will feel completely disconnected from the real world.

You will annoy any friends and family that want to talk to you. You cannot talk to people in the real world at the same time. Yes, you can *hear* them, but they will get a little annoyed after a few minutes of this.  You cannot multitask with this on.  You cannot convincingly listen to people who want to carry on a serious conversation with you.


Conslusion
I think this is a good start, but I think VR has a LONG way to go.  There is absolutely no integrated experience, not like what your phone can normally do, the way all your apps work together.

Honestly, I think the future is in a mixed device that can do both VR and AR.  This could be accomplished either by using your phone's camera, or by superimposing the screen over a heads-up display.