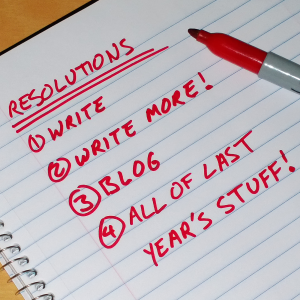 Do you include writing goals in your New Year’s resolutions?  How do you set meaningful goals and make yourself stick to them?  When has setting writing goals worked for you in the past?

I was never fond of New Year’s resolutions until I started writing.  What sold me on the idea was the day that I decided to get serious as a writer and get published.  It was sometime in 2009.  I set a goal to come up with three or four short stories, and submit them to Writers of the Future.  My first two stories, Counting Crows, and Alone got honorable mention.  I submitted a third, called The Witch of Westmoor Hall, but I think it got disqualified because I forgot to delete my name from the manuscript (oops).

The fourth short story got turned into my current novel, Mage’s Craft.

So I’ve had a lot of luck with New Year’s resolutions—at least with writing.  There are two tools that I’ve found that work really well for me: setting SMART goals, and keeping a journal.

SMART Goals
My first real training in goal-setting came when I started working at Microsoft.  We had to write SMART goals for our annual performance reviews.


There are lots of variations on this idea.  You can read more about it in Wikipedia.

Here are the writing goals that I’ve set for myself for 2014:


I’m at a point right now where if I really want to be a writer, I need some serious velocity.  If I want to sell, I need to build momentum with my readers, and to do that I need material.  Most writers who are successful will put out two or three novels per year.  This means that I have to really change how I do things.

Keep a Journal.
I keep a journal so that I can follow up on my goals.  This is where I record my progress, and where I review how well I’ve done at the end of the year.

Sometime in early 2010 I was looking back through my writing journal, and I found some of the original ideas for my short stories.  I’d been writing about the problems that I was having, and all the ideas that I was wrestling with.  And then I read where I’d made a decision that took my stories toward their final direction.  I later went on to win Honorable Mention.  As I read about my struggles and how I overcame them, I felt a sense of confidence and reassurance, and pride in something that I’d accomplished.  It was sublime and inspiring.  Almost transcendental.  There was something else, too.  For the first time I could see myself from two periods of time superimposed one over the other, and I could see the growth and transformation that had happened in between.

Does that make sense at all?

This is how I show that I’ve fulfilled my goals.  The reason that I keep a journal is so that I can go back and read it.  I read my history, and remember how I fought and struggled, and then overcame.  This is such powerful stuff.  I find that it inspires me continually.

My journal isn’t just a diary.  I keep my goals and my weekly progress written down, but I also record everything else that I did.

Conclusion
Setting goals, and keeping a journal so that I can follow up.  That’s really all there is to making New Year’s resolutions work for me.

Have any ideas of your own?  I’d like to hear them.  Drop me a line in the comment area below.