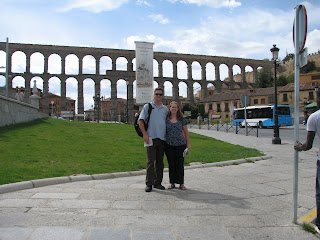 Our first day in Spain was quite an adventure. I am feeling pretty jet-lagged right now. We didn’t sleep much the night before leaving, because we wanted to switch our biological clocks to Spanish time—but we ended up being too wired to sleep on the plane. Then we went straight to Segovia and spent the whole day there. In all, I think I got eight hours of sleep over a 36-hour period. Last night I crashed for about ten hours and didn’t wake up this morning until 9:50. 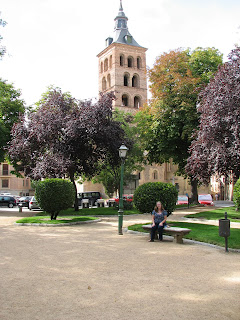 Segovia.
We spent our first day in Segovia. That’s the place with the huge Roman aqueduct, and the huge Disney-style castle. To say the town was picturesque really doesn’t do it justice. The place was simply extraordinary. The old part of the city is on the top of a very tall hill with steep rocky sides. The whole thing is surrounded by walls, originally built by the Romans.

The old Roman aqueduct dominates the skyline, and it cuts the town in half. You can’t tell from the post cards, but it’s right in the middle of the city. There’s a huge traffic circle on one side with a bus stop, and there’s a busy plaza on the other side, and all around are modern European style buildings. Anna was very, very impressed. 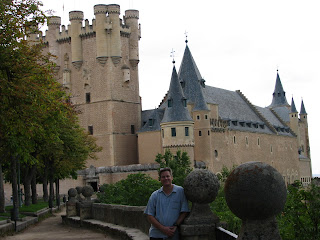 We also went to Segovia to see its iconic Alcazar. That’s the Spanish word for fortress. The castle looks like something straight out of Disneyland—but real. If you want to see an honest to goodness, fairy-tale, medieval-style castle where kings and queens actually slept, then the Alcazar de Segovia a definite must.

Toledo.
We went to Toledo to see a real medieval village. Like Segovia, Toledo also sits on top of a hill, surrounded by battlements and towers. You want to see what a fortified town from the middle-ages looks like? It has walls that are 30 to 80 feet high. It’s indescribable, and yes, people still live there—an honest to goodness city surrounded by fortress walls. How cool is that??? You just don’t see anything like that in the US. 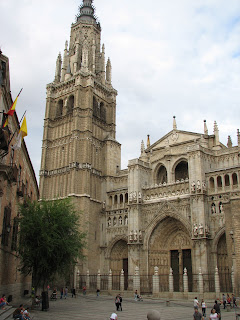 We really should have planned that trip better. Unlike Segovia, everything in Toledo starts closing at 6:00. I was really disappointed we didn’t get to go see the cathedral. It’s supposed to be the oldest in Spain. We also wanted to see the monastery of San Juan de los Reyes. 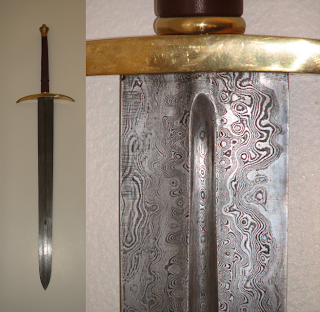 Toledo has some incredible, incredible hand-made art. There are painted plates, which are exquisite. You can’t get them anywhere else in the world. There is this type of etched jewelry with gold and silver inlay, which is indescribable and beautiful. Then there are the swords. Toledo was once famous for its steel, and the Toledo swordsmiths were once the finest in Europe and the middle east. Most of today’s swords are replicas, somewhat cheap and touristy. You have to hunt, but if you’re persistent you can find some real quality blades.

I ended up getting a replica El Cid sword for my father-in-law. I also got a high-quality hand-and-a-half longsword made of beautiful Damascus steel. Anna got a bell, and for her mother (who has temporary command of our platoon while we’re away) we got a special surprise.

The architecture in both Toledo and Segovia is incredible. The Spaniards kicked out the Moors, but their artistic influence stayed. The train station looks like a Mosque. 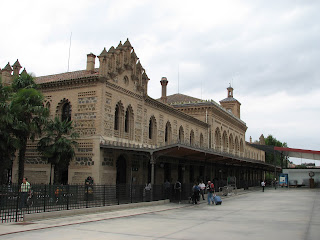 Metro (Subway).
Anna and I have been discovering first-hand just how convenient a modern mass-transit system can be. Directly from the airport, we went all the way to Segovia, and set foot outside only once and that was when we got on the Ave (Spanish high-speed train). And we had a covered walkway just in case it happened to be raining.

The subway system in Madrid is extensive. It looks just like subway systems you see in movies that are set in Europe. It’s pretty noisy. It rolls and jounces along, screeching as it comes to a halt. It’s not too loud, except for when your train passes another, and there’s this appalling scream for a couple seconds. Getting on, I half expected to see little Japanese men with sticks, pushing people on, but there was none of that.

Trains.
We took the trains everywhere. They’re high-speed. They’re electric. The ride is extremely smooth (smoother than a car ride, at least), and almost perfectly quiet (the air-conditioning coming through the vents is louder). There are no seat belts. Some of the tracks are so smooth you barely know that the train is in motion. Acceleration and deceleration is so gradual and the train is so quiet you hardly notice that you’ve started moving or come to a stop. Different trains move at different speeds. The slower ones move along at 140KPH, and the fastest go at a blistering 391KPH. The one that we took from Segovia back to Madrid clipped along at a smooth 245KPH (152 MPH). We got there in 30 minutes flat. 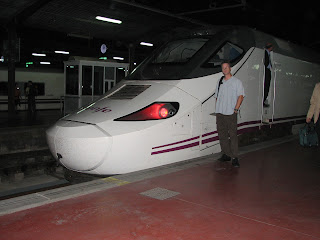 How’s that for mass transit?  I think it looks like a duck...

As you ride, trains coming in the opposite direction can be startling. You never see it coming until you feel a shock wave from the air as both trains meet and go hissing by. A 200ft train will pass in less than a second. Your ears pressurize when you go through a tunnel because it has to push the air through in front of it. The tunnels are narrow and you can see the wall sliding past barely two feet away.
People commute on these trains regularly. You’ll see cars parked at the station in Segovia for people who take the train into Madrid in the mornings and return in the evening.

People-watching.
A popular evening custom in Spain is “Ir de paseo,” or to go for a walk, but that translation really doesn’t describe what it means. The point is to go out and talk with your neighbors and spend time with your friends. People meet up after work when the weather cools off. Young and old alike go out in large groups, all dressed up nice, and sit in the plazas and street corners talking and laughing. There is a tremendous atmosphere. They hang out in sidewalk cafes, “comiendo tapas” (eating tapas), which are small portions of food.

Anna and I went out tonight. We had tortilla (which is like a thick omelet made with potatos), ensalidilla ruso (Russian salad, which is like potato salad, but with more vegetables and no pickle relish), a sampler of Spanish cured meats, and something that looked like pinto beans with ham in olive oil.

Our hotel is right on El Plaza del Sol, which is smack dab in the middle of Madrid. It has a very artsy feel to it. Tonight there was a band of Mexican mariachis (of all things) playing. Last night there was some dude that danced with fire. Artists and musicians hang out. It’s pretty vibrant. 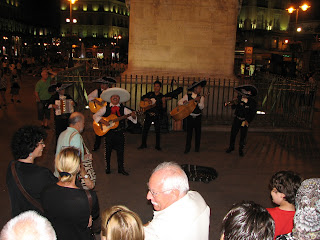 Technology has yet to take over this people’s lives the way it has intruded upon ours. Don’t get me wrong, this place is modern as tomorrow, but you don’t see cell phones everywhere like you do in the US. You see large groups of teens and twenty-somethings strolling along, and few if any of them will be on the phone. I’ve only seen two or three people dig a laptop out of their backpack like you see all over the US.

Historical sites.
I’m continually impressed at the amount of heritage that these people have. We have heritage in the US, but it’s not seven hundred years old. In the US you don’t have apartment buildings abutting 400 year-old churches. You don’t have ancient Roman and Visigothic ruins surrounded by two or three story townhouses. 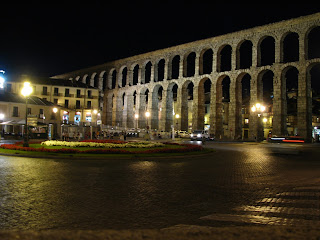 You have to wonder what it would be like to live somewhere like this, to grow up around it. Anna was telling me that all the Spanish exchange students that stayed at her house would comment that there wasn’t anything really old around where people lived. The “New World” as we call it is very aptly named. In the western US we have a few historical landmarks like the Alamo, or an old pioneer village, or maybe if you go back east you can see historical buildings from early colonial times—but we don’t have anything that is really, really old.

Countryside.
My brain kept doing back-flips. It looks like southern Idaho, or eastern Oregon/Washington, or Utah with flatter mountains. There is grass everywhere. Lots of groves of something, fruit and olives. There are trees, but there are no forests. People have lived here and used this land for thousands of years..
Add a smattering of acacias, Joshua trees, and sage, and this could be anywhere in southern Utah.

Climate.
It’s been warm and muggy the entire time. I probably wouldn’t have noticed if I didn’t live in Utah where it is very dry year round.

Language.
I understand that there are a lot of differences between the language spoken in Spain versus what they speak in Mexico and South America. Aside from the obvious accent and the differences in vocabulary I’ve noticed also that word-use is very different. I can’t put my finger on it, but I see signs here and I think, “Oh, in the US it would have said something different.” I think that in a lot of ways the differences are much like what you’d expect between English spoken in Great Britain and English spoken in the US, but in the case of Spain versus the rest of the world, the difference is even more pronounced.

My Spanish is functional. I won’t describe it as perfect because I make far too many mistakes. That whole “el”, versus “la” thing, I could never quite get it down. The general rule that –o is masculine and –a is feminine only takes you so far. Then there’s words like “el agua,” or “la mano.” Also you have –e words like “el aciete,” all of which you simply have to memorize.

I have moments of coherence when I’m not babbling like an oaf. The people are rather kind. I ask them a question and get a confused look for a second, then their face lights up and they answer. I can almost see the wheels turning as their brain churns away, trying to interpolate, and then the light goes on—ding! “Ah, pues que si!”

More to come.
This is the first part of a two-part post.  To view more, click here: